The IVSC is delighted to announce the appointment of Lim Hwee Hua to its Board of Trustees. In 2009, Lim Hwee Hua became the first woman to be appointed a… 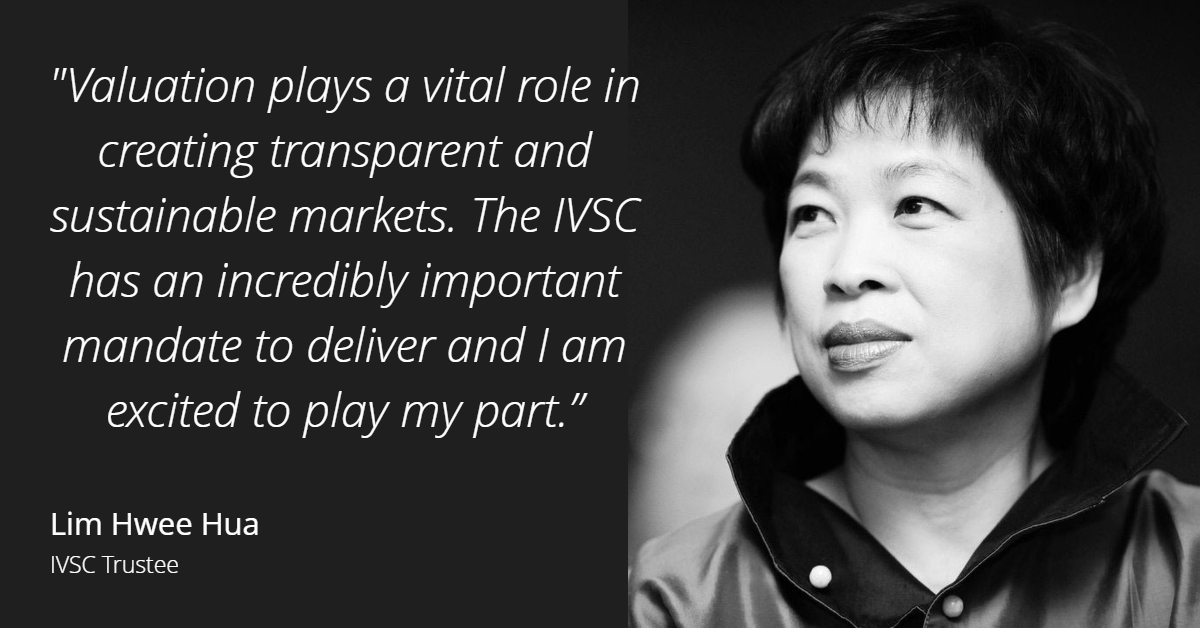 The IVSC is delighted to announce the appointment of Lim Hwee Hua to its Board of Trustees.

In 2009, Lim Hwee Hua became the first woman to be appointed a full Cabinet Minister in the Government of Singapore.   Her political career began in 1997 when, as a candidate of the ruling People’s Action Party, she was elected as a Member of Parliament.

At the Finance Ministry, Hwee Hua spearheaded the reform of the accountancy sector, reviewed Government’s investments in business, and helped implement financing options for small and medium enterprises. Meanwhile, at the Transport Ministry, she corporatised Changi Airport, helped establish a master-plan for aviation and was instrumental in expanding the International Maritime Centre.

Her ministerial responsibilities reflected her educational background. Hwee Hua went to Cambridge University on a scholarship, graduating with an honours degree in mathematics and engineering in 1981.  She then joined the Administrative Service and held various positions in the Finance, Education and Law ministries.

In 1989 she obtained a Master of Business Administration from the University of California and joined Swiss Bank Corporation as an investment analyst. In 1992 she moved to Jardine Fleming as Head of Research and Director of Business Development and in 2000 she joined Temasek Holdings where she was Managing Director of Strategic Relations. She left Temasek in 2004 when she became a minister of state.

Hwee Hua retired from politics in 2011. She returned to the corporate sector, taking on appointments such as that co-chairman at local private equity firm Tembusu Partners, Senior Advisor to the global investment firm Kohlberg Kravis Roberts, chairman of AsiaPacific Exchange and director of BW Group and Summit Power.  She also served as independent non-executive member of Ernst & Young’s Global Advisory Council (2011-2014), member of Asia Advisory Board of Westpac Institutional Bank (Australia) (2013-2018) and honorary chairman of the Securities Investors Association (Singapore) (2013-2017).

Hwee Hua joins the IVSC Board of Trustees in their collective effort to develop and enhance the global valuation profession for the public good. The IVSC Board of Trustees meets regularly throughout the year and is responsible for setting and overseeing the strategic direction of the IVSC. The Board also plays a key role in ensuring robust and transparent standard-setting processes, with the International Valuation Standards developed by independent technical committees of leading experts from around the world. Trustees include representatives of the World Bank, senior business and valuation professionals, the Chair of the US Financial Accounting Foundation, a former Vice Chair of IOSCO, and the Deputy President of IFAC.  The Board is chaired by former UK Chancellor of the Exchequer, Alistair Darling.

“We are delighted that Hwee Hua has agreed to join the Board of Trustees, and we look forward to welcoming her at our next meeting in June.  Hwee Hua’s experience in both government and the private sector will be extremely valuable to the work of the board in advancing the global valuation profession. Her appointment is particularly welcome given the growing relevance of IVS to the Asia-Pacific region, where there has been a broad and concerted effort in recent years to see international valuation standards implemented in different markets.”  Alistair Darling, Chair of the IVSC Board of Trustees.

“I am looking forward to joining my fellow trustees at the IVSC in their collective mission to enhance standards and professionalism in valuation.  Robust and internationally-agreed valuation standards play an important role in promoting best practice and confidence throughout our interconnected global economy. As a profession in its own right, valuation has a huge part to play in creating transparent and sustainable markets. The IVSC has an important mandate to deliver and I am excited to play my part.”  Lim Hwee Hua, IVSC Trustee

The IVSC is the UN-recognised, independent and not-for-profit body responsible for setting the International Valuation Standards (IVS) and advancing the global valuation profession.

The IVSC works with valuation professional organisations, standards setters, regulators, preparers and users of valuation data, across all asset classes and throughout the world, to set internationally-agreed standards underpinning professionalism. IVS are applied today in more than 100 countries worldwide.

The IVSC Board of Trustees comprises business, financial and political leaders from around the world and oversees the work of the Council in setting valuation standards in the public interest.

Find out why valuation matters and how the IVSC is working to enhance standards and professionalism here: https://vimeo.com/262371878