PRESS RELEASE: Former UK Chancellor of the Exchequer, Alistair Darling, has been appointed Chair of the IVSC’s Board of Trustees during the Council’s AGM in Singapore today. He takes over… 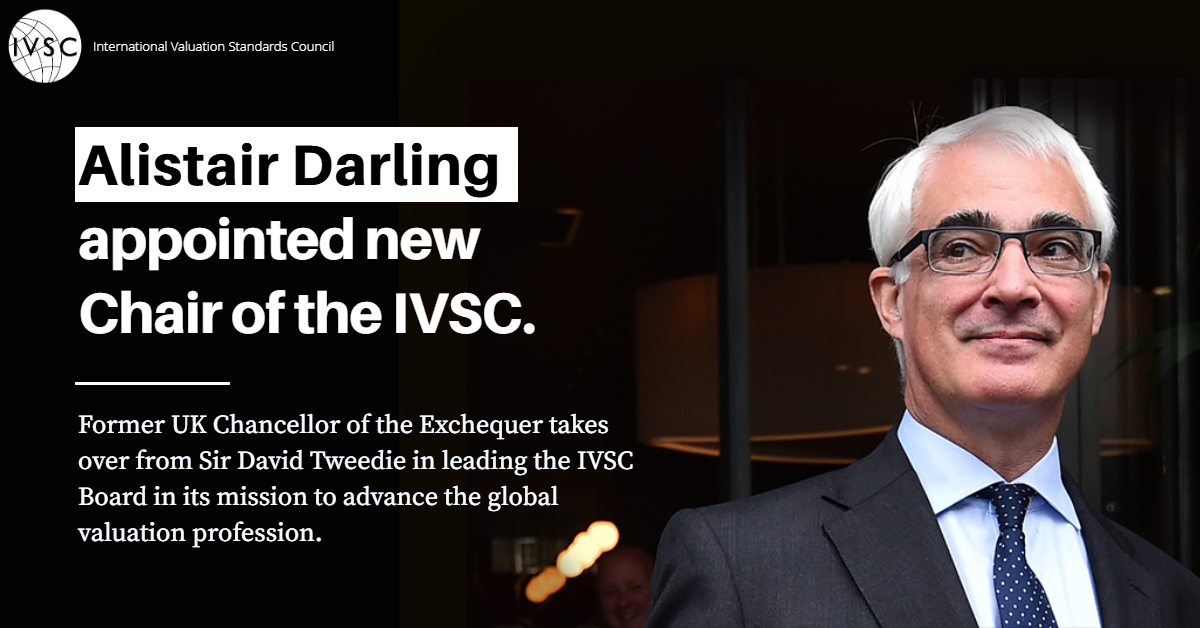 Former UK Chancellor of the Exchequer, Alistair Darling, has been appointed Chair of the IVSC’s Board of Trustees during the Council’s AGM in Singapore today. He takes over from former International Accounting Standards Board (IASB) leader, Sir David Tweedie, who steps down after seven years at the helm of the global valuation standard setter.

Alistair will join fellow trustees in overseeing the strategy and mission of the IVSC, the independent body responsible for setting International Valuation Standards (IVS) which are applied today in more than 100 countries. The standards seek to elevate the global valuation profession and foster transparency and stability in financial markets.

Alistair served as Chancellor of the Exchequer – the UK Government’s chief financial minister – from 2007 to 2010, against the backdrop of the most turbulent and far-reaching economic crisis the world had seen for 60 years. He introduced the measures needed to avert a collapse of the banking system and played a central role in restoring stability to global financial markets, brought about in large part by poor valuations of sub-prime mortgages in the US.

Before being appointed Chancellor in 2007, Alistair held a number of ministerial roles within the UK Government, including Chief Secretary to the Treasury (1997-98), as Secretary of State for Work and Pensions (1998-2002), Transport (2002-06), and Trade and Industry (2006-07) where he was also President of the Board of Trade. He was appointed to the House of Lords in 2015.

“The lessons of the Global Financial Crisis provide a stark reminder that underlying asset valuations can have a seismic influence on the global financial system. The catalyst in 2007 was packaged sub-prime mortgages. Today, valuers are increasingly involved in the valuation of pervasive and complex assets including business intangibles, goodwill and financial instruments, the collective markets for which run into trillions of dollars. The IVSC is leading efforts to improve standards and professionalism in valuation, creating more transparent and robust financial markets.” Alistair Darling.

Commenting on Lord Darling’s appointment, IVSC Chairman, Sir David Tweedie, said: “I am delighted that Alistair has been appointed as the new Chair of the IVSC Board of Trustees. As I step down following seven years and two terms as Chair I am hugely encouraged by the collective determination of the valuation profession to elevate standards and professionalism. With his extensive background in global politics and financial markets, Alistair is eminently qualified to lead the IVSC’s Board of Trustees through the next stage of the professions evolution.

Nick Talbot, IVSC Chief Executive, commented: “We are immensely grateful to Sir David for his energy and dedication to the IVSC and to the global valuation profession over the last seven years. His wisdom and humour have been invaluable to his many colleagues and friends. During his time as Chair of the Board of Trustees, David has been instrumental in driving forward IVS which are now applied by valuers in more than 100 countries. He has also succeeded in overseeing an evolution in the standards development process, culminating earlier this year in the formation of the new Financial Instruments Board. As we say goodbye to David we look forward with enthusiasm to the work ahead with Alistair as Chair. Since he joined us as a trustee earlier this year, the Board has been grateful to him for his guidance and insight on many important issues. He is rightly respected for his leadership across the financial sector that we, and valuers operate in, and we look forward to continued progress in advancing the profession under his chairmanship.