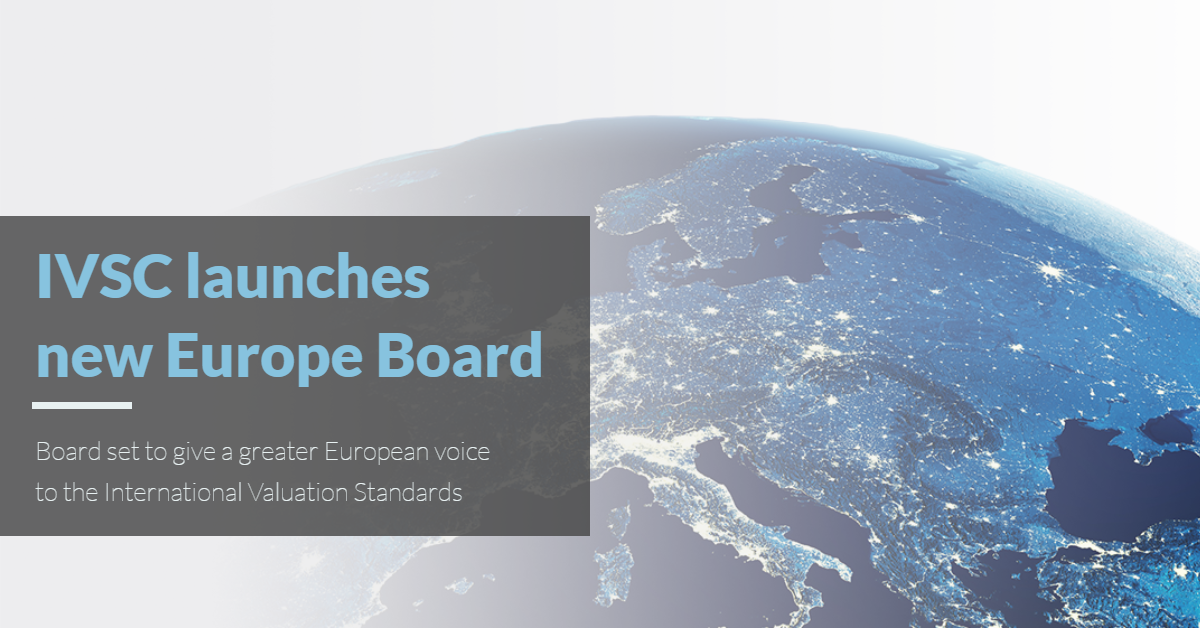 The International Valuation Standards Council (IVSC) – the independent standard setter for the global valuation profession – announces the appointment of experts to its new Europe Board, which met for the first time in Paris on 26 February.

The Board, which is chaired by former Duff & Phelps European leader, Yann Magnan, brings together valuation, finance and regulatory experts to encourage and support the implementation of internationally-agreed valuation principles. The Board will also ensure European expertise continues to inform the evolution of IVS, by encouraging and facilitating input to the IVSC’s technical consultations and broader projects.

“Transparent and internationally accepted valuation standards are increasingly important given the interconnected nature of European economies. This is further amplified when you consider the central role that Europe plays in global markets. For those of us at the heart of European valuation, working with international clients, the IVS are as relevant here as they are in Australia, the U.S. or China. It is imperative, therefore, that Europe is not simply taking the international standards but that it plays a leading role in shaping global best practice. This board is looking forward to working with Valuation Professional Organisations, standard setters, regulators and other valuation stakeholders across the continent to ensure this is the case.” – Yann Magnan, Chair of the IVSC Europe Board

The IVS, which cover all asset classes including real estate and tangible assets; business valuation and intangibles; and financial instruments, are used today by professionals in every European country. They are included in EU legislation and referenced widely in valuation guidance issued by the European Banking Authority (EBA). Across Europe, like other regions of the world, a large and growing number of Valuation Professional Organisations have incorporated, or are working towards the adoption of IVS within the standards and guidance they issue. Service providers, too, are developing firm-wide approaches which are built on the foundation of IVS, giving greater confidence in the valuations they provide from one market to the next.

“For the clients of firms like Deloitte, who operate across international markets, consistent and transparent valuation standards are vital.  We’ve been working as a firm to ensure our global approach incorporates the principles set out in the IVS, and I’m looking forward to drawing on this experience through my involvement with the board.” Jesús Federico Valero Gil – Head of Economics, Valuation and Modelling Practice, Deloitte

Despite the growing use of IVS, and increased awareness of the importance of valuation quality and professionalism to sustainable and transparent financial markets, there is still work to do to embed a common set of high-level, internationally adopted principles. Europe is no exception. Unlike the accounting profession which has galvanised in recent years around a set of International Financial Reporting Standards (IFRS), the global valuation profession continues to suffer a lack of cohesion and identity in the absence of one set of universally adopted standards. For users of valuation advice, the resulting lack of transparency and comparability can often mean added risk and costs.

Reassuringly, influential organisations such as the United Nations, through their Economic Commission for Europe (ECE), are pressing the case for international standards in areas such as property valuation:

“Property valuation criteria based on commonly shared appraisal principles and standards should be promoted and applied systematically. The importance of applying IVS as an essential factor for market efficiency and transparency has been underlined in the UNECE Policy Framework for Sustainable Real Estate Markets. The IVSC is playing an important role in promoting transparency and consistency in valuation approaches, worldwide.” Giampiero Bambagioni, Urban Economist and Bureau Member of the UNECE Committee on Urban Development, Italy

For an economically mature and diverse region like Europe, where valuation remains a largely unregulated and domestic-driven profession, the challenge of establishing a consistent approach to valuation is real. Areas like real estate valuation are fairly developed, with IVS well established in market practices, including through valuation rules issued by European VPOs. Conversely, the business valuation profession is still embryonic, and there are few obvious ‘homes’ for valuers focused on financial instruments. Europe can look to counties like Singapore and Canada to learn valuable lessons about the infrastructure needed to enhance professions in these areas.

“Europe represents in many ways the most mature yet most fragmented continent in terms of approaches, standards and methodologies. I feel it is important to have additional focus on this continent, as IVS become more established worldwide.” Christian Luft, Head of Pan EMEA Valuations, JLL and member of the IVSC Europe Board

The IVSC Europe Board has been created to offer a strong and international voice for European valuation, and to ensure the IVS continue to empower a robust and connected valuation profession.

“The term ‘international’ does not mean ‘somewhere else’, it is here, on our doorstep. Europe sits at the heart of international markets and it is vital that European valuation communities are shaping and influencing global best practice through the IVS”. – Yann Magnan, Chair of the IVSC Europe Board

The IVSC Europe Board members are: