The IVSC Standards Review Board (SRB) and its associated Asset Standards Boards (“The Boards”) are strong advocates of an open and transparent standard-setting process. In pursuit of this aim, the… 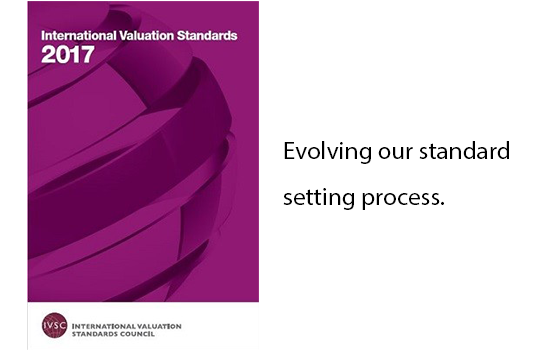 The IVSC Standards Review Board (SRB) and its associated Asset Standards Boards (“The Boards”) are strong advocates of an open and transparent standard-setting process. In pursuit of this aim, the boards constantly review the IVSC’s standard-setting approach to ensure it reflects best practice and is fit for purpose.

Next month (July) the International Valuation Standards will be updated for the first time since January 2017, with changes formally coming into effect from January 2020. IVS will no longer be referred to by the calendar year of publication (e.g. “IVS 2017”) but instead it will be simply referred to as “IVS” with details of publication and effective dates included within the document. Then, from 2020, the boards propose to introduce a change to the IVS publication cycle, with the opportunity for more responsive updates where required – an approach already applied by international standard setters such as the International Financial Reporting Standards (IFRS) Foundation.

The challenge of setting timely and implementable standards

Beyond the extensive technical and consultative activities, one of the biggest challenges faced by standards setters is the pace at which new or revised standards are issued. On the one hand it is imperative that credible professional standards respond quickly to market needs, such as changes in the regulatory environment, or identified areas of concern around professional practice. However, on the other hand, there is a need to give time for standards to bed in properly if they are to be applied with high degrees of competence, giving sufficient time for training and monitoring infrastructure to be put in place. Published too infrequently the standards can ignore or, worse, exacerbate market challenges; published too frequently or in the absence of any clear ‘cycle’, they can undermine efforts by professionals to adopt them. Balancing these imperatives is vital.

The IVSC has historically published updates to the International Valuation Standards every few years since they were first published in 1994. This has often led to substantive amendments and additions to the standards. Aside from the challenge around responsiveness to market issues – for example IVS 2007 (published August 2007) was not revised until almost four years into the Global Financial Crisis in 2011 – the historic approach has tended encourage periods of intense stakeholder engagement around the drafting of the standards, followed by longer periods with less interaction and debate on the subject. Updates, when they have been published, have been extensive and therefore arguably more challenging to adapt to expediently.

The nature of financial, business and investment markets today, especially with emerging technologies and rapid changes in regulatory and fiscal landscapes, has fundamentally changed the equation when it comes to the standard-setting process. It is still imperative that professionals have the time and infrastructure needed to apply them properly, but it is becoming more and more important to respond quickly and credibly to market needs, both to protect and empower the profession and to enhance confidence in valuation.

Further to discussions among the Boards, at last year’s AGM meetings, with the IVSC Advisory Forum and following consultation with Valuation Professional Organisations from around the world over the last year, the IVSC has agreed to move from a model of updating IVS every few years, to a more flexible and responsive model where IVS becomes a ‘living’ document, updated according to market needs. This means IVS will be updated to incorporate new chapters where they are deemed necessary, and/or to revise existing standards where post-implementation reviews indicate issues related to their adoption.

Putting in place a new timetable

Collectively, the boards have expressed the view that the ‘General Standards’ chapters for IVS are close to being a lasting framework for the global valuation profession – in reality, then, we do not anticipate regular and holistic updates and amendments to these parts of the IVS which apply to all valuations. However, in many areas of the asset standards, the boards envisage the insertion of new chapters and passages which will support valuation professionals as they work in new or rapidly evolving areas of the valuation practice – examples of this could include valuation of intangible assets and non-financial liabilities; cryptocurrencies; inventory; complex financial instruments; social value, biological and agricultural assets.

Moving forward, IVS will be updated with new or amended content up to two times a year. These new updates will be published within IVS in either July or January, following a minimum three-month period of public consultation. Once the updates have been published within IVS they will become effective after six months (in either January or July), giving professionals and other adopters time to become familiar with the changes. In certain circumstances this period of familiarisation may be extended but in all cases clear guidance on effective dates will be published alongside and within IVS.  This does not necessarily mean IVS will be updated every six months, but the model allows for these updates as and when there is a clear market need, which will be determined by the boards through their regular interactions with stakeholders, including through ‘agenda consultations’.

Example of how the standards update process might look:

In July, IVS will be updated to reflect the technical revisions consulted on during the latter part of 2018, plus the final version of IVS 220 which covers Non-Financial Liabilities as part of the Asset Standards for Business Valuation.  These changes will be presented in the revised IVS (referred to today as ‘IVS 2017’ but going forward simply as ‘IVS’) on 31 July and will become effective from January 2020, giving professionals and other adopters of the standards a six-month period of familiarisation.

As part of a transparent standard setting process, the boards will not only publish the latest version of IVS online, but will also subsequently publish the consultation responses, a ‘red line’ version and a ‘basis of conclusions’, which will provide a historic record of the changes to IVS and the reasoning behind these changes. This means the latest version of IVS will always be accessible through the IVS website, along with two contextual documents. Furthermore, archived versions of IVS will also be made available online for those carrying out historic valuations, who need access to previous editions of the standard.

Consultations are an essential part of the standard setting process and the IVSC will continue to seek input to these consultations from all stakeholders. As is currently the case, the boards will continue to issue a regular Agenda Consultation, known as an ‘Invitation to Comment’, which will help to inform the work programmes of the various technical boards. Later in 2019 the recently launched Financial Instruments Standards Board will issue an Agenda Consultation soliciting feedback on the areas which they should focus on. A similar consultation will be issued by the Standards Review Board lin 2020, which will cover the other parts of the IVS. Then, once all the boards are operational, a single Agenda Consultation will be issued on a regular (1-2 yearly) basis, subject to the boards’ progress against the identified priorities.

The boards are confident that this new approach will lead to timely and responsive updates to IVS, and that these updates will ensure a manageable evolution to the standards for professionals and the entities that adopt IVS. Furthermore, the boards are hopeful that an established and documented update cycle will give greater context to consultations and encourage more dialogue with all stakeholders in the valuation process.  These changes are focused on improving the standards setting approach. However, the boards will continue to review the model and will welcome feedback from all stakeholders in order to achieve a process which reflects best practice and balances various imperatives.

We are grateful for the comments and feedback we have received so far on the proposed changes and invite further feedback via email to [email protected] on any of the details outlined here.

Mark Zyla, Chair of the IVSC Standards Review Board