The Importance of (and challenges with) Valuing Intangibles

Share
Comment: The importance of (and challenges with) valuing intangibles Jeremy Stuber is a global equity analyst at Newton Investment Management, leading on valuation and accounting issues across all sectors. His...

The importance of (and challenges with) valuing intangibles

Jeremy Stuber is a global equity analyst at Newton Investment Management, leading on valuation and accounting issues across all sectors. His responsibilities include reviewing recommendations, challenging existing holdings and developing the valuation framework. Jeremy has covered various global sectors, including aerospace & defence, automotive, engineering and IT services.  Jeremy chairs the Corporate Reporting Users’ Forum (CRUF) UK and co-chairs the Capital Markets Advisory Committee (CMAC), which is one of the advisory groups of the International Financial Report Standards (IFRS) Foundation. He is a Fellow of the Institute of Chartered Accountants in England and Wales (FCA), qualifying with Ernst & Young. Jeremy holds MA and MEng degrees from Cambridge University.

”The value of a smile... It costs nothing but creates much.

This quote, attributed to Dale Carnegie, encapsulates the problems of valuing intangibles: they are hard to define, even harder to measure, but are becoming increasingly important to investors’ understanding of a business’s performance and prospects.

Intangible factors have always been part and parcel of valuing a business. What has changed is that today’s business models themselves have become more intangible. In fact, nowadays a business hardly needs to own any physical assets: offices can be rented, information can be processed and stored on the cloud, and logistics can be outsourced. For many modern businesses the largest investment is building a brand, rather than buying a machine.

This makes the task of valuation much more difficult, but also a lot more interesting. In the past, market valuations often mirrored the reported balance sheet. Searching for stocks with low price-to-book ratios was a good indication of a potential bargain. However, book values are no longer so informative as lots of intangibles are missing from the balance sheet, and some intangibles that are on the balance sheet, including many acquired intangibles and goodwill, are very hard to interpret. 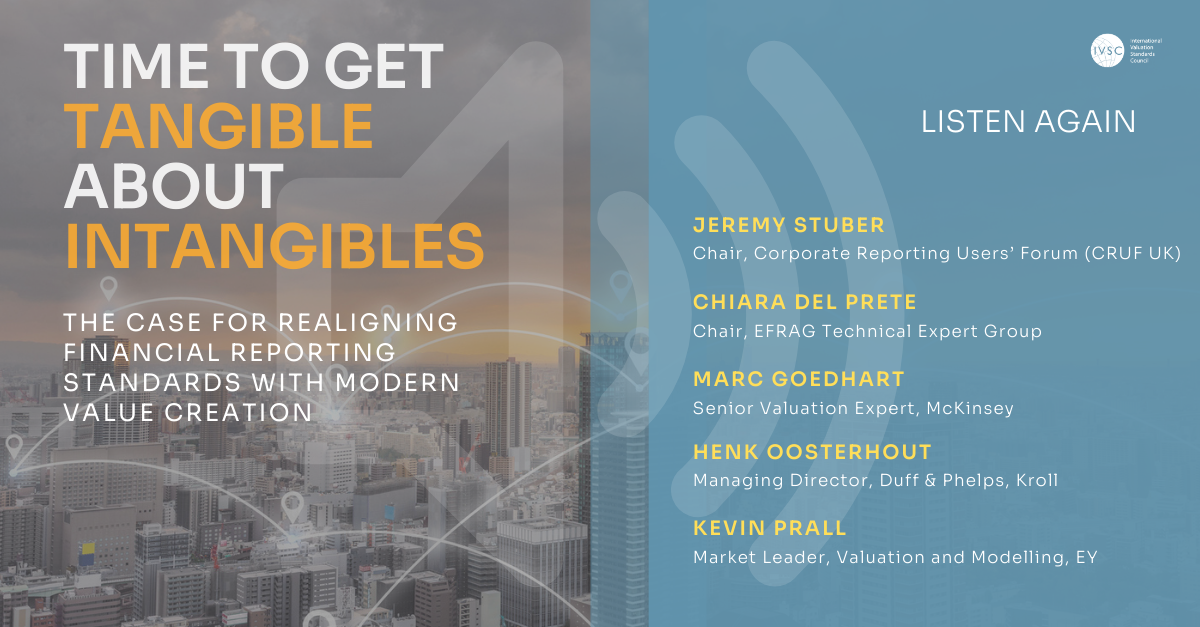 Watch the IVSC’s webinar on Valuation and Intangible Assets.

Intangible intangibles are easy to describe, but hard to define. We reflect them in valuations in a variety of ways, such as in revenue forecasts or in the discount rate, but they are not generally recognised as a separate component of invested capital.

Here are some common examples:

After each company meeting, we ask ourselves: Do we trust that they will deliver on their promises? Many investor questions boil down to calibrating management’s guidance; is it optimistic or pessimistic? What is a likely range of outcomes? Many years ago, I attended an investor visit to a shipbuilding company. During the visit, the CFO (chief financial officer) excused himself to speak to a couple of the engineers on a tricky repair project. I was impressed that the CFO was in contact with the project directly and was being kept up to date with progress. These impressions are often expressed in a valuation in terms of a ‘management premium’ where a target price is based on a higher multiple of profits. Trust and governance are very closely linked, so there is a lot of overlap with ESG (environmental, social and governance) disclosure.

”Just because intangible intangibles are not treated as separate assets and liabilities on balance sheets, or as separate components in an investor’s definition of invested capital, it does not necessarily mean that they are underappreciated by the market. When a well-regarded CEO suddenly resigns the share price will often fall, giving clear evidence that the market does take note.

Is the culture innovative or cautious? Does creative freedom abound or is it process focused? On one factory visit I saw huge posters on the walls containing very detailed production data which the shop-floor workers were expected to record. There was a clear connection between this measurement culture and how successful the company was at cost-cutting. In terms of the valuation, I had a great deal of confidence in management’s cost-saving guidance, but at the same time I thought that sales growth might be lower than for the company’s peers, because this was not an area of focus.

There is remarkably little information about employees in most annual reports, making it hard to find answers to simple questions: Who does what? Where do they do it? How much are they paid? I was once comparing two R&D (research and development)-intensive businesses and at first glance the company spending more on R&D should have a larger value of accumulated innovation. However, this analysis misses the fact that one business had all its employees in a high-cost country, while the other had a strategy of moving its R&D to a low-cost country, where the employees were both lower-cost and more productive. Attrition rates are also helpful, especially if they are disclosed over time by segment and country. It helps an outsider get a feeling for what is happening inside the business.

Customer feedback is always helpful to test whether the professed value proposition really is appreciated. Perhaps, rather surprisingly, during one company visit, it was mentioned that the company was rated poorly by many customers. However, the reason was not necessarily negative because although it offered very low prices, any variation of terms, such as a change of volume or date, was penalised heavily in the contracts. Customer concentration is also very helpful information, such as the percentage of revenues from the top ten customers, and the exposure by industry is useful too. Reliance on a few large customers, especially if they are under pressure, means a riskier business and therefore a lower valuation. Similarly, supplier information such as number and concentration of suppliers is helpful to understand the scope of operations and the complexity within the business.  When it comes to natural disasters or stresses on supply chains, information about where the suppliers are located is also crucial.

Just because intangible intangibles are not treated as separate assets and liabilities on balance sheets, or as separate components in an investor’s definition of invested capital, it does not necessarily mean that they are underappreciated by the market. When a well-regarded CEO suddenly resigns the share price will often fall, giving clear evidence that the market does take note.

”Intangible factors have always been part and parcel of valuing a business. What has changed is that today’s business models themselves have become more intangible.

Tangible intangibles can be valued based on historic expenditure, albeit as a first approximation. Including tangible intangibles as part of invested capital gives a better reflection of the underlying economics and prospects of a business.

Under current accounting standards, a lot of investments in intangibles are accounted for as expenses. As a result, many intangibles are missing from the balance sheet and reported profits are understated for growing companies.

Intangibles missing from the balance sheet

Let’s consider a branded consumer goods company. Its business model is to build and maintain its brands to enable it to charge premium prices. In economic terms, brand is obviously a key asset of the business. It may come as a surprise that these internally generated brands do not appear as an asset on balance sheets; accounting standards dictate that advertising is expensed in the period, rather than capitalised and recognised as an asset.

If we calculate return on invested capital (ROIC) based on the balance sheet, the ROIC is extremely high. As a result, these businesses are often described as exceptionally high quality with amazing barriers to entry, because the very high ROIC has been sustained for many years.

However, if we include the value of the brand in our definition of invested capital then the ROIC is much lower. This is a much better reflection of the underlying economics, revealing that these are very good quality businesses with very good barriers to entry.

The adjusted ROIC is important not only when describing the quality of the business, but also as a key measure in any discounted cash-flow (DCF) model, influencing fade and growth rates.

Reported profits are supposed to reflect the performance of the business over a given period. However, for a growing business investing a lot in intangibles, profits are often understated, sometimes significantly.

Let me explain why, using a software as a service (SaaS) business as a real-life example. The business invests a lot in intangibles, with almost half of revenues being spent on sales and marketing to attract and retain new customers, and around one sixth of revenues spent on R&D to ensure that its product is up to date. These investments have supported very strong revenue growth.

The problem is that under the current accounting rules, both sales and marketing and R&D are expensed in the period incurred. While this treatment is prudent, as we can not be sure that these investments will in fact ultimately create an asset, it goes against the matching principle, because a large part of these investments relate to future periods rather than the current period. As a result of the accounting treatment, reported profitability was barely above break-even, giving the impression that the performance of the business was very weak indeed.

What happens if we include these intangible investments as part of invested capital? By capitalising and amortising, we are effectively splitting the amount spent on intangible investments into two parts: amortisation, relating to the current period, and growth, related to future periods. It is the same approach as we use for tangible assets when capex (capital expenditure) is treated as an addition to property, plant, and equipment on the balance sheet, and depreciation is included as an expense in the income statement. I argue that we should only include the part of the expense relating to the current period, the amortisation, when calculating profit. For this company these adjustments resulted in a radically different view of performance: it turns out that this is not a marginal business at all, but a highly profitable one.

The fundamental challenge for investors is poor disclosure. Selling, general and administrative (SG&A) expenses are often disclosed as a single number in the financial statements. This was acceptable in the past, when SG&A was a relatively small part of the overall cost base and was mostly fixed. However, for intangible-intensive companies SG&A is often the largest part of the cost base and includes lots of future-oriented expenditure related to intangibles, such as advertising and promotional spend, training and information technology costs. A better disaggregation of expenses, ideally a matrix by function (such as R&D) and by nature (such as depreciation), would help investors to identify these intangible investments.

To help investors forecast, it would be helpful for companies to disclose the average time lag between a cost outlay and the benefit of a future-oriented expense. How many years does it take, on average, for R&D for a pharmaceutical company to result in revenues from new medicines? This would allow users to estimate “R&D in progress” (monies spent on products not yet sold), which would be analogous to construction in progress for tangible investments.